“The potential of carbon farming - a reality check"

The development of agriculture has become one of the central issues in society. This is because food production is responsible for one third of annual greenhouse gas emissions and is therefore a key contributor to climate change. Conversely, agriculture suffers from extreme weather conditions and farmers' harvest and livelihoods become increasingly uncertain. 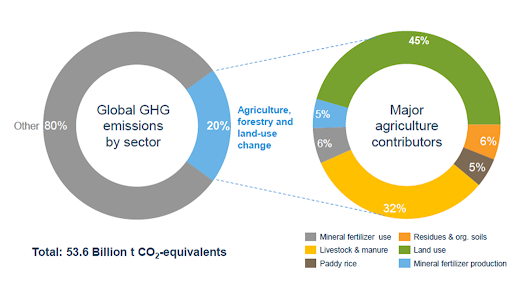 It becomes clear that a sustainable system is needed. One, that can feed the growing population and at the same time protect the planet. Carbon farming is one of several approaches pursuing this goal. It goes beyond sustainability. The aim of this principle is not just to keep land standing but to improve it.

How it all started

This agricultural approach is not new. It has been around in the US for 50 years and is slowly but surely spilling over to Europe. According to current estimates, about 50,000 hectares in Germany are farmed according to the principles of carbon farming – on both organic and conventional farms. Carbon farming describes a system of farming principles that increases biodiversity, enriches soils, improves water systems and enhances ecosystem services. And it does so by restoring organic matter to the soil and promoting soil biodiversity.

The focus is clearly on the soil. It has an enormous potential to store carbon and counteract climate change. Soil that is rich in carbon is also fertile, and fertile soil in turn is the basis for high yield and profitable agriculture. Thus, it is crucial for people’s food security. Scientists assume that if the global content of organic carbon in the soil increases by 0.4% annually, all climate-relevant carbon emission can be fully compensated.

As already mentioned, it all started in the US and shortly after in Australia. Names like Joel Salatin, Gabe Brown, Dr. Ellaine Ingham and David Marsh are widely known in the circles. Gabe Brown's principles manifested in his book Dirt to Soil have been spread worldwide. In his book he explains how he converted an intensively cultivated area of 2,000 hectares into a regenerative one. The result speaks for itself: the humus content increased from 1.4% to 6-10% within 25 years. The humus build-up in turn ensured higher yields on his farm and sequestered CO2. Gabe Brown's five basic principles serve many farmers worldwide as a basis for conversion: 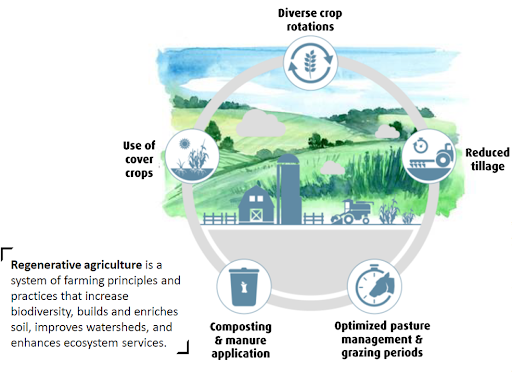 So far, there is no uniform approach to what carbon farming should look like. There are a variety of methods, all of which pursue the same goal: Not to harm the land and soil, but to improve it. Versatile concepts are also being successfully implemented in small areas all over Europe. The most widespread approaches include:

Building up humus to permanently store carbon in the soil takes time. However, it is worth the wait, because regenerative methods have two key advantages: they can counteract climate change and make agricultural systems more resistant to diseases, weather extremes and pests. Our food system would be protected in the long term. Additionally, farmers can reduce their expenses, mostly to a more efficient use of fertilizer, fuel and labor costs.

So, why isn’t every farmer doing this? There are several concerns. Farmers fear the conversion period of at least four years, during which expenses are usually higher than income and yields are lower. Moreover, there is a general lack of education about implementing carbon farming methods and a lack of needed machinery. So far, there hasn't been a scalable tool available which is measuring the success of carbon farming and the amount of humus that was built. This is one central challenge which has to be overcome, in order to make carbon farming more attractive, feasible and worth insuring. Anyhow, there are some promising attempts by startups. Though carbon farming has a romantic image, technology and carbon farming are not mutually exclusive. On the contrary, technology and digitalization can be helpful additions to the system.

Where there is a problem there is or will be a solution. Young companies such as SmartCloudFarming and dagan are working on measuring the development of soil through satellite data collection.

SmartCloudFarming, as a global acting company, is collecting satellite, soil and weather data, in order to feed the information into a developed Soil AI. The given information results in a so-called Soil Carbon Map. Through this map the potential of soil carbon sinks will be measurable and potential areas for carbon sinks can be located. SmartCloudFarming was part of RootCamp’s first batch. You can read more about them here.

Biochar on the other side is a key technology for decreasing emissions through enhancing soil buildup. It has been intensively researched in recent years. A number of experiences with its applications and innumerable scientific publications prove today that in addition to its direct climate benefit as a carbon sink, biochar can be used in agriculture in many profitable and beneficial ways. Biochar can help to increase yields, promote humus formation, increase the water storage capacity of soils and thus raise their resistance to drought, and reduce greenhouse gas emissions such as methane and nitrous oxide as well as nitrate leaching.

Several startups have picked up this promising technology. Carbonauten, founded in south Germany, is successfully producing biochar from waste, like saw residues, wood chips and green cutting. The raw material can be used for agriculture in order to build humus and promote the ability of soil to capture carbon.

In order to make carbon farming methods more attractive to farmers, companies have emerged, promising to support people and organizations to sequester carbon. CarbonFuture and Nori are examples for global acting players within this field. Whereas Klim or CarboCert mainly act in Germany and connect farmers with companies in this matter. Their aim is to make the market more attractive for farmers through giving them financial rewards for their effort.

What started on isolated small farms around the world and was often seen as a romanticized idea is now receiving serious attention from major players. Barilla developed a sustainable agriculture code in 2018. Other companies such as Danone, Mars and Nestle created a coalition to protect biodiversity in their agricultural activities. One of the coalition's three pillars is scaling up carbon practices. Outdoor brand Patagonia and Soap producer Dr. Bronner’s are also advocates of carbon farming methods.

With the segment gaining traction established players within the agricultural and fertilizer sector K+S, as well as Arkop work on supporting carbon farming methods on a large scale. Also new players are on the rise: e.g. Pivot bio is one of a bunch of companies trying to change the status quo through developing an alternative to synthetic nitrogen fertilizer in order to decrease negative effects they have on the environment.

Still there is a debate about what exactly accounts as carbon farming and what it can and cannot accomplish. Farmers are regenerative if they say they are. There are no labels, no certifications that claim carbon farming practices for themselves. Besides, each farm needs its own way of carbon farming adapted to the regional circumstances like climate and soil quality. There is not the one and only solution. To figure this out time and patience is needed.

RootCamp joined forces with DLG and hosted a webinar discussing innovation and feasibility of carbon farming. Major international players from established corporations as well as Startup founders were taking part on the 22nd of July in order to share their ideas and exchange thoughts. There were Rolf Härdter, Head of Agronomy and Advisory at K+S Group, Michał Słota, Sales & Business Development Specialist at ARKOP, Suvrajit S., CTO at SmartCloudFarming and Michael Sernatinger, International Sales Representative at carbonauten GmbH.

Anyhow, with carbon farming we are at the beginning, which offers room for further development. It has the potential of forming the next agricultural revolution, but this requires courage, creativity, technology and strong partnerships. For carbon sinks to be created on the scale that is necessary, a carbon sink economy with appropriate financial incentives is needed. It is crucial that robust systems are developed that are auditable and that map the durability of carbon sinks and thus the actual climate impact with scientifically sound calculation methods.

Laura is passioned about writing and innovation. After finishing her Master’s degree in Sustainable development at Uppsala University she has been working for renowned initiatives within the field of food production. She supports RootCamp as a freelancer in communications and is writing blog articles on current topics.

“Is AgBiotechnology the key to sustainable agriculture?"