RootCamp startup Be-Grow: “The biggest advantage of RootCamp is the focus”

At their former employer BASF, Maik Schacht and Norbert Heidinger worked with an experienced team on making a novel hydrogel that helps plants thrive despite climate-change induced droughts, available to farmers. To get faster and more effective, Maik and Norbert bought the technology and the knowledge from the corporation and founded their own startup Be-Grow as a management buy-out.

On farms the hydrogel makes more water and nutrients available to the plants, which is crucial for the survival of plants in dry summers and to produce more yield. Unlike former similar products, it is completely free of harmful substances and can even be used in combination with fertilizers. The hydrogel is as effective as a greenhouse when growing plants but at low cost for the farmer: “The investment of a farmer to build up a greenhouse is about one million Euro per hectare. In comparison, the cost for Be-Grow Boost products for one hectare is about 250 Euro, which can be easily covered by the additional yield.” This way the product is also affordable for smallholder farmers in poor countries. 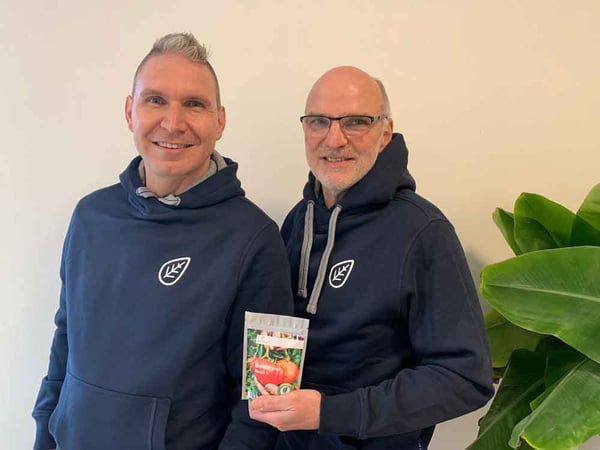 Beyond the business plan

Maik and Norbert act with Be-Grow not only as a business but also conduct social projects together with the UN and other NGOs. The founders aim to solve worldwide yield loss problems of farmers in poor countries, resulting from the climate change. For the future Maik wishes for a better understanding of these globally connected issues: “In Western Europe a lot of people haven’t fully grasped the consequences of climate change. We work a lot with farmers in North-African countries whose fresh vegetables are sold in European grocery stores especially in the wintertime. If they have to close their business because climate change causes crop shortfalls, then we will stand in front of empty shelves."

These pressing issues were the main reason why Norbert and Maik left their secure jobs to become founders. “After more than 20 years in a big company we wondered if we could invest the rest of our lives doing something with global positive impact. We have been financially stable so after several discussions we decided to go for it."

As much as they believed in their products, the founders also faced some challenges. The agritech community is based on stable trust-based networks. As a startup, it is hard to be recognized in this community, but they build up their business in several countries joining forces with well-known local partners. When talking about financing a startup, most investors don’t fully understand the market potentials of the input-based production steps of farmers.

But Maik and Norbert were lucky enough to be able to bring their own starting capital to the table and bootstrap. Thinking back to the beginning of their business, Maik would give himself one advice: “Invest in professional equipment such as label printers from the beginning. It will save you time and energy for the important tasks.”

Now at RootCamp Norbert and Maik are learning the most from the high-quality trainings, especially from the preparations for pitching. Another highlight is the joint project-development with K+S as partner of the RootCamp: “It is all about creating solutions for real-life problems which will have a remarkable impact.” What helps most is the specialization of RootCamp on agritech topics which is uncommon among acceleration programs: “The biggest advantage of RootCamp is the focus!”

Leonie is a digital native with a love for storytelling and visual design. She has a background in journalism and is working on her Masters degree in cultural studies. At RootCamp she assists day to day business, social media and public relations as a working student.

RootCamp startup CROPT: “We need to increase the agricultural production by 70% until the year 2050 and the only technology that can help us today is IT”