When Florian Gösling and David Gebhard went backpacking in India, they didn’t plan to come back with a business idea. But when travelling the country they also visited shrimp farms. While India is the biggest producer of shrimp globally and ships them worldwide, the conditions are not always the best for the animals, the consumers and the environment. So David and Florian decided to find a better solution - even though as a lawyer and an engineer they had nothing to do with the agrifood industry. What got them hooked was the possibility of “creating a positive impact with a product that everybody loves”, says David. 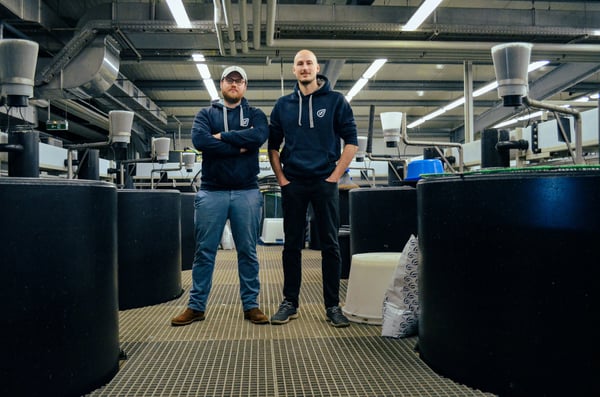 That’s why they developed a smart reef system which is a technology that makes it possible to cost efficiently grow sustainable shrimp locally. As the founders’ aim is to make a difference they are not only targeting “Michelin star restaurants but the average person who goes grocery shopping and wants to cook the best possible shrimp pasta for their family." Their business case: “Luxury made affordable”.

But not only the well-being of the consumer is important. As the blue economy works with living creatures, they built an “ideal environment to keep the shrimps thriving and happy." Consumers are also caring more about what they put on their plates so David resumes: “Building an agritech startup is always about emotions." To get the first Aquapurna shrimps to the shelves, they implemented industry-partnerships and are building the first production hall close to Hannover. Even though being an agritech startup bears some hurdles, they see themselves as part of a bigger trend.

A niche-market ready to scale

During the last two decades the land-based-aquaculture is maturing from a niche-market. Even big players from the blue economy are moving from sea to land and in the last year innovators received billion dollar investments. “For really making an impact on the planet we live on, we have to be bold on the founders side and on the investor side. We see more and more VCs who act accordingly." Due to new technologies sustainable shrimp production is now scalable. That’s why David’s learning from the founding process is: “If you think you are thinking big, think even bigger. And then get off your desk and talk to other people about it."

A good place to do that is RootCamp, even though they were technically still on their desk because we are still in a pandemic. But the weekly standup meetings with time for reflection on hurdles and achievements between the startups were one of the highlights for David: “In this special situation you are reminded that you’re not alone and that there are other people on a similar journey. Also you’re held accountable." Besides that the workshops were “spot on and catered our specific needs without generic phrases." All in all: “The learnings we got out of this will accompany us in our journey that lays ahead."

Leonie is a digital native with a love for storytelling and visual design. She has a background in journalism and is working on her Masters degree in cultural studies. At RootCamp she assists day to day business, social media and public relations as a working student.

RootCamp startup Be-Grow: “The biggest advantage of RootCamp is the focus”